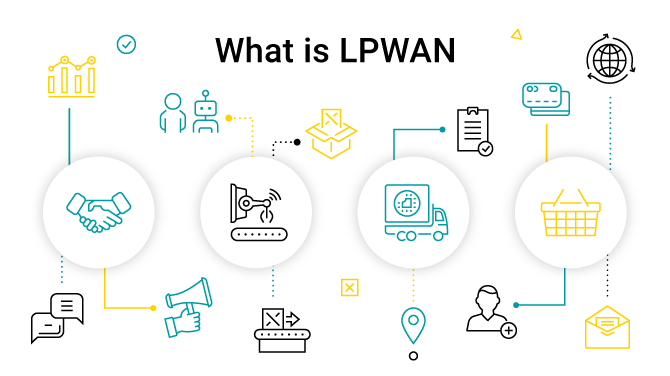 While the rocketing amounts of sensor data provide fuel for the Internet of Things, network infrastructure, especially low-power wide-area network, seems to be the road on which the IoT revolution is running.

LPWAN at a glance

Emerged in 2013, the term LPWAN stands for Low Power Wide Area Network. While not denoting any particular technological solution, it serves as a generic term to refer to a class of network technologies designed to communicate wirelessly over relatively long distances using lower power than in case of other networks, such as telephony, satellite communications or WiFi. These two major features, namely energy-efficiency and wide signal coverage, not only give shape to the name of the technology but also make it the perfect match for the needs of ever-evolving market of IoT applications.

The Internet of Things  has gradually been introduced into our daily lives. It is a fact that we are increasingly surrounded by machines and objects connected to communication networks which send and receive information to perform different tasks. We live in a world of cameras and sensors transmitting information of all kinds, for example, the state of traffic in different parts of a city, levels of pollution in the atmosphere or geolocation of scooters and bicycles for shared use that have populated our streets. If you would like to find out more on the topic of IoT, check out our What is the Internet of Things blog post.

So, if the Internet of Things is on the rising tide, its development must be somewhat catalyzed by the elements of its ecosystem to make its growth exponential. On the other hand, network connectivity, considered the backbone of IoT, has long needed a stimulus that only the LPWAN technology could provide.

This is especially true of the industrial branch of the IoT growth tree. If market reports are anything to go by, the number of connected IoT devices increases from the estimated 8.3 billion in 2019 to 22 billion in 2025, and LPWANs are expected to be a key driver of growth. In a recent market report that includes an extensive analysis of LPWAN, IoT Analytics estimates that LPWAN will be the fastest growing IoT communication technology over the next 5 years, with the number of devices connected to LPWAN growing by 109% per year and projected to exceed 1 billion by 2023. 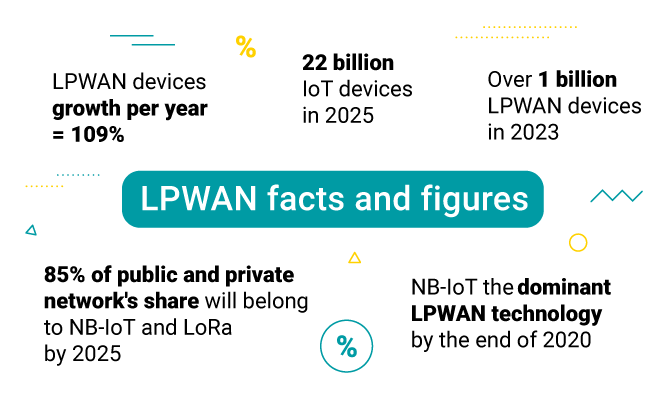 Another thing is that the LPWAN market remains fragmented, but it seems that such standards as LoRa and NB-IoT are emerging as the two leading technologies – we will come to this point later in the article.

Today, the LPWAN market is still in its early stage and is characterized by a high degree of technology fragmentation (IoT Analytics investigated 16 LPWAN technologies and counting) and a network footprint that is yet far from global. However, market analyses suggest that this is rapidly consolidating around some key technologies. It is estimated that in 2017, LoRa was the overall market leader when both public and private network deployments are counted, while Sigfox was the leader in terms of connections across public networks, with the vast majority concentrated in Europe. However, the situation is likely to change by the end of 2020, when the fast-growing NB-IoT technology is expected to overtake both LoRa and Sigfox in terms of connected devices, becoming the dominant LPWAN technology for the rest of the 5-year forecast period. LoRa at the other end will maintain its leadership in private network deployment. With both public and private networks, NB-IoT and LoRa already represent approximately 70% of the current market and are expected to increase their market share to almost 85% in the next 5 years.

Although LPWA networks offer multiple possibilities, some use cases are more easily defined than others since they have already been tested and implemented in real life scenarios. Of course, this by no means precludes innovation – in fact, new and experimental use cases are the fuel for the Internet of Things, and LPWAN is a perfect match when it comes to this. Still, at the early stage of their development, low-Power wide-area networks offer much to discover in terms of implementation possibilities.

Although parking management poses ever greater challenges in city areas, LPWANs offer flexible solutions to fix the problem. Starting with a IoT sensor that allows us to identify whether a parking space is occupied or not, the information can be used as input for numerous applications, such as signs indicating how many parking spaces are free on a given level, or a mobile app that indicates where these sites are located, and even interfaces that notify the authorities that a certain vehicle has been parked for too long. For this particular use, the low power feature of LPWA networks is more important than the long range; after all, changing the batteries of hundreds (or even thousands) of parking space monitors each month would definitely not be cost-effective.

Tens of thousands of light bulbs are lit everywhere, whether on sidewalks, crowded intersections or lonely stretches of highways. In most cases, monitoring on such networks consists in someone seeing a light off and calling the relevant authorities by phone. However, with LPWA, the lights themselves could alert a command centre if the light bulb is working and if it is on or off, potentially allowing for better energy use and increased safety.

A simple pressure gauge that communicates data readings on time can help detect a leak even before it is reported or even before any damage occurs. For pipeline networks that run for many kilometres, the ability to communicate over long distances where no network exists is critical, while expected battery life should be measured in years. In a city, the same signal that provides long distance communication in rural environments can also be used for underground penetration, allowing monitoring of pipelines beneath the surface.

In order to track a shipment, you generally need to scan the load in each moment it is handled to another person or place. In between these transfers, it is simply assumed that the cargo remains in the same building or, when it moves, on the same truck or train. But enter LPWA, which makes it possible to implement smart pallets that can keep sending signals to allow tracking not only the location of the cargo, but also whether it has been opened, dropped or mishandled. Here, we benefit from the use of LPWA both for long distance communication, as the shipment moves from one point to another, and in terms of battery life, as no one wants to have to locate and change the batteries of a frequently moving pallet.

Over the past decade, two main categories of LPWAN technologies have emerged: networks based on non-cellular solutions, such as Sigfox or LoRa, and those using the existing cellular technologies to provide their services, such as LTE-M and NB-IoT. As mentioned earlier, the battle between these two seemingly conflicting standards may surprisingly turn into peaceful coexistence, as their characteristics, scope and target use cases differ from each other more than slightly. Let's then have a dive into some facts behind each of them.

LoRaWAN specialises in the transmission of small data packets: between 0.3 and 50 Kbits per second (3). Created by a French start-up, the protocol was acquired by Semtech, founder of the LoRa Alliance.

Bringing together operators and industrial players interested in promoting compatible networks, LoRa is marketed through commercial operators, while still remaining an open-source network that can be developed or operated by any company, with the sole limitation of purchasing LoRa chips. It therefore ensures transferability between operators, especially important for MVNOs or the possibility to benefit from roaming agreements between the members of the alliance.

SigFox, LoRaWAN's main competitor, was created in 2009, as a French initiative in the field of the Internet of Things. Adaptation of this pioneering low-speed network requires the use of Sigfox-certified transmitters/receivers, but guarantees compatibility and facilitates interoperability between all the countries covered (thus avoiding the problems associated with roaming).

While LoRa and Sigfox technologies are growing in importance in today's IoT connectivity scene, it is no wonder that mobile network operators are pressing for the deployment of LPWANs for the Internet of Things that use cellular solutions to get their share of the IoT cake.

The 3GPP organisation, dedicated to the standardisation of mobile technologies, has been proposing two IoT standards based on existing cellular networks: LTE-M and NB-IoT, with the aim of alleviating the issues of compatibility of M2M applications and reducing the production costs of communication modules.

LTE-M technology, which has recently enjoyed considerable success. Operators are testing this low-speed network as a complement to LoRa technology. Thanks to the use of the licensed spectrum and taking advantage of the same protocols as 4G, LTE-M offers more stable speed, reduced latency and better roaming as compared to its non-cellular rival.

Although both LoRa and LTE-M are aimed at the same applications, they are complementary, as LTE-M technology offers higher speeds of up to 1 Mb/s and even 10 Mb/s compared to the several tens of kb/s offered by the LoRa solution. LTE-M technology offers advantages in terms of speed and latency but is far behind LoRa in terms of tariffs and energy and bandwidth consumption.

Standing a bit apart from the other competitors in the field, NB-IoT technology is deemed to be the standard of choice for telecommunications giants. It uses the 200 Khz frequency band previously operated by the GSM system and is therefore ideal for applications such as telemetry, with a large number of fixed assets in the field which require reduced data volumes and for which the speed of transmission is not strategic. In the long term, if the technology maintains its momentum and is developed on a massive scale, it will make it possible to dramatically reduce costs in relation to its competing technologies.

Although there seems to be fierce competition between the LPWAN standards that have populated the Internet of Things landscape, the duel in fact is of a win-win kind. Why so? Firstly, because each of them focuses on catering to the needs of different use cases and given the enormous diversity of the Internet of Things applications, we can safely assume that all the LPWAN technologies will find an industry niche to thrive in. Secondly, the rapid growth that they are experiencing as technologies considered still not in their prime yet can only act for the better of the LPWAN technology landscape. The more they are discussed, popularised and deployed, the more it is likely that finally their growth will be concluded by the advent of an all-embracing standard that will unite their advantages in one single solution; it can be only a matter of the next few years that we may expect such a consolidation to happen.