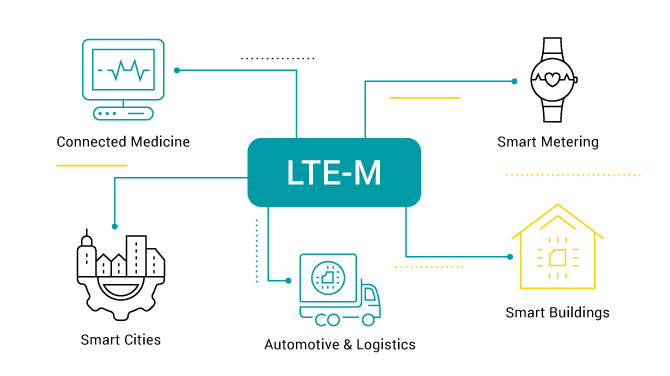 LTE-M is a leading LPWA network technology for Internet of Things applications. Used for interconnecting objects such as IoT sensors and actuators, or other industrial devices via radio modules, it complements the landscape of IoT connectivity options to keep the smart revolution going.

How does LTE-M work?

In fact, LTE-M is the industry abbreviation for the LTE (Long Term Evolution, or simply 4G) Category M1 standard that was published by 3GPP in 2016 (Release 13). It is a standard for narrow-bandwidth cellular communications to connect resource-constrained devices to the Internet that transmit small amounts of data over long periods of time, while providing high signal penetration and retaining a minimal power consumption. With the 3GPP Release 14, the data rate offered by the standard rose to 4Mbps, which has translated to greater mobility and voice capability over the network as compared with the earlier 1Mbps version.

What are the benefits behind LTE-M?

What is special about LTE-M is that it was designed to rely on existing LTE network infrastructure, with the aim of reducing compatibility problems of M2M applications and lowering the production costs of communication modules. But there is even more to it than that; here are the most important facts and features about LTE Cat. M1:

An LTE-M-based system is able to support a wide variety of cellular devices designed for many different purposes; ranging from smart meters to vending machines and automotive fleet management to safety and medical devices. As these devices differ from use to use, they have many disparate requirements, therefore any LTE machine-to-machine deployment must be flexible.

Most IoT-enabled devices must be small and fit on equipment that is very cost-sensitive. With many low-cost IoT systems already available, LTE-M provides the benefits of a cellular system, but at a significantly lower cost.

IoT deployment devices will need to be left unattended for long periods of time in areas where there is no power supply. Constantly replacing batteries is expensive, so any device should have a battery life of up to ten years. This means that the system must be very effective in terms of battery economy.

Applications for this network should operate within a variety of locations, not just where coverage is good. They will need to operate within buildings, often in locations with restrained access or even underground (think smart meters). With its deep signal penetration capabilities, LTE-M provides a perfect answer to all these needs.

Since remote device volumes are expected to be huge, the environment must be structured so that networks can accommodate large numbers of connected devices that may only require small amounts of data, usually in short peaks but with low data rates. Talking about large-scale deployments, let’s mention that cellular technologies integrate really well with IoT Device management solutions such as our Coiote IoT Device Management platform which leverages the possibilities of the LwM2M IoT protocol for scalable provisioning and management of resource-constrained devices.

Where is LTE-M applied?

Since LTE-M enables a wide variety of applications that require low data rates and real-time communications, there is a number of potential use cases:

LTE-M is the perfect solution for intelligent public lighting, monitoring environmental conditions, or checking which parking lots are free... All these and many more are the applications for intelligent cities that allow more efficient control of the city infrastructure and a lower environmental impact.

Thanks to LTE-M, meters will be connected to the Internet at lower costs, with the aim of measuring autonomously the consumption of energy, water or natural gas using IoT protocols and even in hard-to-reach places where signal strength is next to nothing – at least for the standard network solutions.

Fleet control, route optimization to determine the exact location of the driver or to minimize incidences of losses of goods, among others: these are some of the possibilities that LTE-M guarantees.

Connected sanitary and medical devices have become a trend in recent years. These new devices let medical treatment be carried out outside the hospital, to simplify healthcare routines.

People and animal trackers, fitness wearables, smart watches or any other kind of personal smart devices – LTE-M offers a wide range of possibilities to integrate the IoT into our personal lives.

With LTE-M technology, tracking the location of your assets in real time and monitoring their status will be much easier and more effective.

How does LTE-M fit the LPWAN puzzle?

As mentioned before, LTE-M belongs to the category of low power wide area network technologies, which means that it is crucial to understand what the position of this technology is among other competitors in order to gain an outlook on the future prospects of the standard. What follows is a short overview of the existing LPWAN solutions presented in comparison to the LTE Cat M1.

Over the past decade, the rise of the Internet of Things market has led to an intensification in the deployment of LPWA networks. These can be classified into two broad categories: Sigfox or LoRa type non-cellular networks for the Internet of Things, and networks using existing cellular infrastructure, such as LTE-M and NB-IoT (of which you can read more extensively in another one of our features).

Created in 2009, Sigfox is a patented French low-speed network solution that has gained significant traction in the field of the Internet of Things. Unlike LTE-M, the choice of this technology requires the use of Sigfox-certified transmitters/receivers, which can be a stumbling block in the adoption of this proprietary technology. On the other hand, while the LTE-M infrastructure is based on the licensed spectrum, Sigfox utilizes the unlicensed spectrum, which means that the frequency bands for data transmission are free for public use. With its significantly lower data rates as compared with LTE-M, Sigfox is an excellent choice for use cases where the devices only need to send small, infrequent bursts of data.

As already mentioned, LTE-M is one of the IoT-driven technologies that piggyback on the standard LTE connectivity. In contrast, the industry has seen the rise of another 3GPP initiative – NB-IoT – which operates outside the LTE infrastructure. Yet, one big advantage of devices based on NB-IoT is that they can consume significantly less power than those operated by the LTE-M standard. Another one is the cost-effectiveness: chipsets engineered specifically for NB-IoT applications are simpler, so that the overall expenses in terms of large device fleets are vastly reduced. For more differences between these two technologies, read our blog post on Narrowband-IoT. 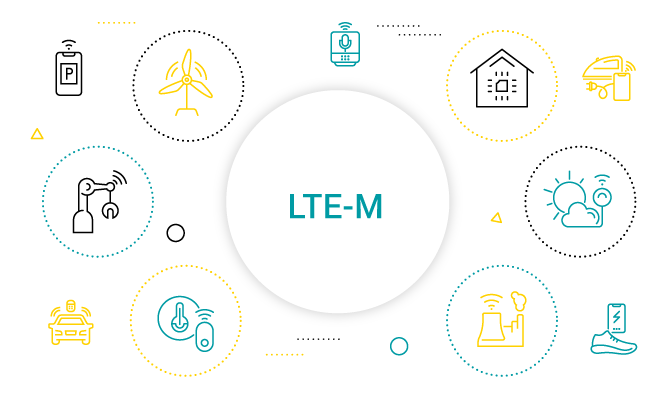 What the future holds for LTE-M

In the realm of emerging technologies trying to break through in a highly competitive ecosystem, what truly revolutionized the Internet of Things sector are the LPWA networks, and LTE-M is a significant player among them. The MNOs (mobile network operators) and MVNOs (mobile virtual network operators) who’ll ignore these emerging technologies are at peril of becoming irrelevant in the game. These medium- and long-range solutions, ideal for assets that aim at communicating very small amounts of data at low speed on a daily basis, have great potential for development. What’s also interesting is what the future holds for IoT; that is, the incipient arrival of the 5G revolution that may homogenize the existing cellular network technologies into one overarching standard.

But before that happens, it is vital to know what each LPWA technology has to offer in terms of its own competitive advantages and how it responds to specific applications. The bottom line for LTE-M is that it is the best choice when it comes to migrating legacy 2G and 3G M2M devices, but also for new use cases that require higher bandwidth while focusing on lower power consumption for increased battery life.