Expanding Anjay-Zephyr integration on a Nordic development board 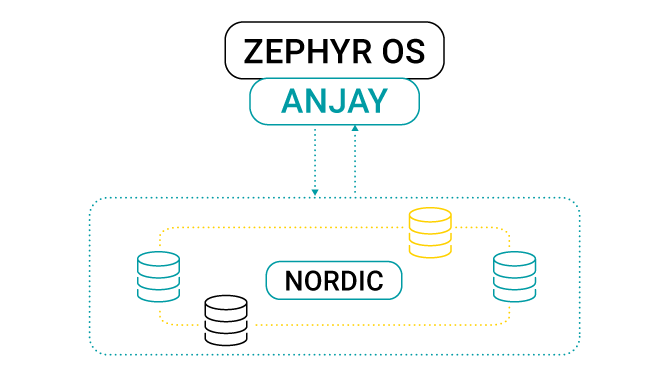 We expand our Anjay integration using Zephyr OS on nRF9160 Development Kit – the board popular among IoT devices and desired by our clients. It offers two push buttons and switches, four LEDs and a GPS module with both onboard and external antennas. Apart from that, there is also a nanoSIM card slot to let users connect to the LTE network.

During development, we made use of nRF Connect SDK provided by Nordic Semiconductor. It contains Zephyr RTOS and libraries recommended for various devices, including nRF9160.

One of the problems we faced was the entropy driver. CC310 library has the entropy_get_entropy function, which requires an input buffer to be 144 bytes long – it dictates more complex implementation of the entropy_callback function used in the anjay_configuration_t object.

Another challenge was clock synchronization. Using the lte_lc library forced us to add new configuration entries (e.g. CONFIG_BSD_LIBRARY=y). After that modification, the CONFIG_POSIX_API=y entry generated an error so it had to be removed. Because of that, clock_settime used in set_system_time on the STM platform couldn't be reutilized on the nRF9160 platform. This issue led us to the date_time library. The source of the current timestamp is the external NTP server defined in default_config.h. This timestamp is then obtained in the avs_time_real_now function present in compat/time_compat.c using date_time_now. The library updates timestamp periodically by means of internal methods – the update interval is set with the CONFIG_DATE_TIME_UPDATE_INTERVAL_SECONDS option.

The GitHub repository has been updated with described integration. Developers can track changes listed in the CHANGELOG.md file.