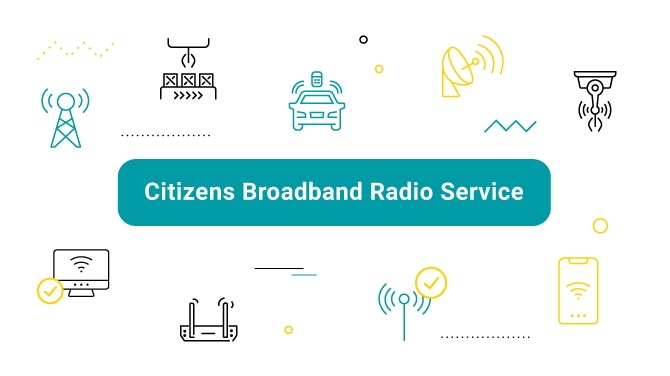 We have long known that because the radio spectrum available for use is naturally limited, we would eventually run into the issue of overcrowding. And so we did. With the proliferation of wireless technologies and connected devices, every inch of real estate (i.e. every frequency available) is more precious than gold. This is why when the US Federal Communications Commission (FCC) released the Citizens Broadband Radio Service (CBRS) for commercial use, it sent shockwaves through the US telecom industry. What is CBRS and how can it affect the US wireless landscape?

The Citizens Broadband Radio Service (CBRS) is the name used in the US for a radio frequency between 3550 to 3700 MHz. It may only be a 150 MHz wide band, but in 2018 it’s worth was estimated at 260 billion USD, as per Bloomberg. For years, the CBRS has been reserved for federal use, primarily for radar systems and aircraft communications. However, the FCC – responsible for allocating and managing radio frequencies in the US – realized that it was an underused band in a world where every wavelength mattered. Therefore it came up with a plan on how to release much of that frequency for commercial use while still securing the federal interests. 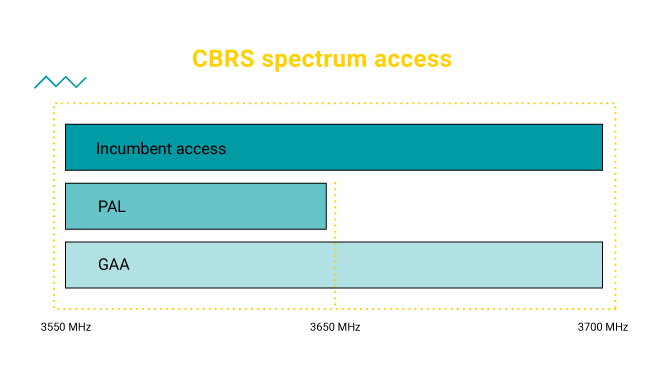 This is why the Citizens Broadband Radio Service is a three-tiered spectrum that can be shared between federal and non-federal users as well as between different commercial entities. The spectrum has been divided in the following way:

All these frequencies are administrated by Spectrum Access Systems (SAS). They are intended to authorize access for PAL and GAA users based on the information conveyed through the Environmental Sensing Capability (ESC) sensors. To give you an idea of how this works, imagine that there are PAL users operating on all 7 channels they have at their disposal, while GAA users occupy some of the remaining 8 channels. The task of the ESC sensor is to “listen out” for tier-1 devices, such as radars. If one comes within distance, the ESC sensor sends out an alert to the SAS to make room for it on the spectrum. Tier-1 users have their choice as far as the channels go and they obviously have top priority, so if they require a channel within the 3550-3650 MHz that’s already occupied by a PAL user, the latter has to yield within 5 minutes of receiving the information. This may set in motion a domino of sorts: a PAL user can only occupy channels on the 3550-3650 MHz band, so if they run out of free channels on that band, they can move to a different one that might be at the time occupied by a GAA user. The GAA user will therefore have to move to any of the 5 channels on the 3650-3700 MHz band that’s available or, if no channels are free, stop data transfer altogether. 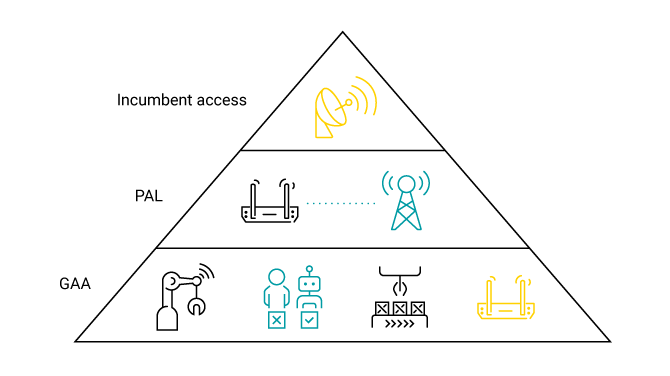 What can CBRS be used for?

OK, we now know how the Citizens Broadband Radio Service works, but that still leaves us with the question: why should we care? It’s not just about freeing more frequencies on a crowded spectrum, as we’ve already explained. It’s also about the kind of frequencies that are being released and what can be done about them. And as it turns out, there’s quite a lot. Let’s dive into some use cases for CBRS.

This is the primary and the most immediate goal of releasing the 3.5 GHz band. Mobile networks no longer handle just phones or laptops, but also a deluge of smart and IoT devices. Despite the constant improvements in network capacity that we’ve seen over the years, to maintain the throughput in densely populated areas, mobile operators need to start offloading traffic. There is no other way, if they want to remain competitive and keep their customers satisfied. The expectation is that, in the short term, the CBRS will simply be used in the cities to handle more traffic in already existing networks.

However, the Citizens Broadband Radio Service also offers a lot of possibilities to start new deployments and diversify one’s network. One of these possibilities is fixed wireless access (FWA). Up until now, investing in FWA often meant service providers had to give up a part of the precious spectrum used for mobile to handle wireless broadband. The Citizens Broadband Radio Service is an opportunity to grow without making the sacrifice. It is especially valuable in rural areas, where broadband connectivity through cable and fiber has often simply not been feasible, which wireless internet service providers (WISPs) are now diligently taking advantage of. 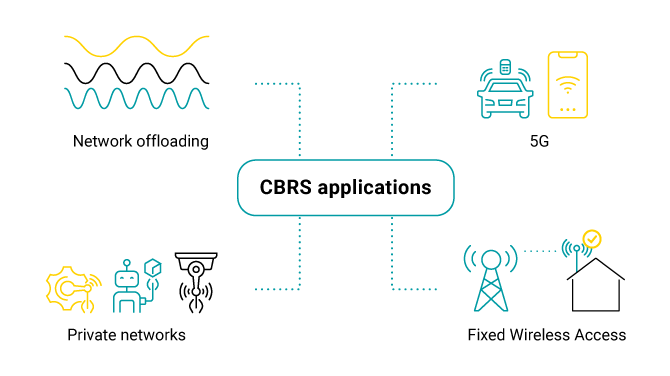 Another avenue for growth that the Citizens Broadband Radio Service opens for telcos is 5G. The 3.5 GHz band is a valuable resource for the mid-band (2.5-3.7 GHz) spectrum deployments, which many operators consider the golden middle for providing optimal speed and distance in 5G deployments. This is why, over time, we can expect that in densely populated areas, such as cities, the CBRS frequencies will be “refarmed” for 5G usage. As 5G networks can handle significantly more traffic, it stands to reason that they would replace the 4G/LTE networks we already discussed.

Last, but not least, the unlicensed portion of the CBRS spectrum is a tasty morsel for enterprises who want to run private wireless networks. This way, they won’t have to depend on costly carrier networks and what has previously only been available to the market giants, can now be used by others as well. The Citizens Broadband Radio Service promises all the advantages of LTE (better security, reliability, and more control) without the commitment to any operator. This spells both cost savings and new opportunities for enterprises.

Watch out for CBRS

All that we’ve talked about is happening here and now. Everyone is scrambling to get their piece of the cake – the last CBRS auction (105) raised over 4.5 billion USD in bids. This should come as a shock to no one, considering the potential and therefore the hidden value that the 3.5 GHz band offers. So if you’re in the US, keep your eyes open to news about the Citizens Broadband Radio Service – there’s bound to be some interesting developments coming!