IoT vs M2M — what is the difference? 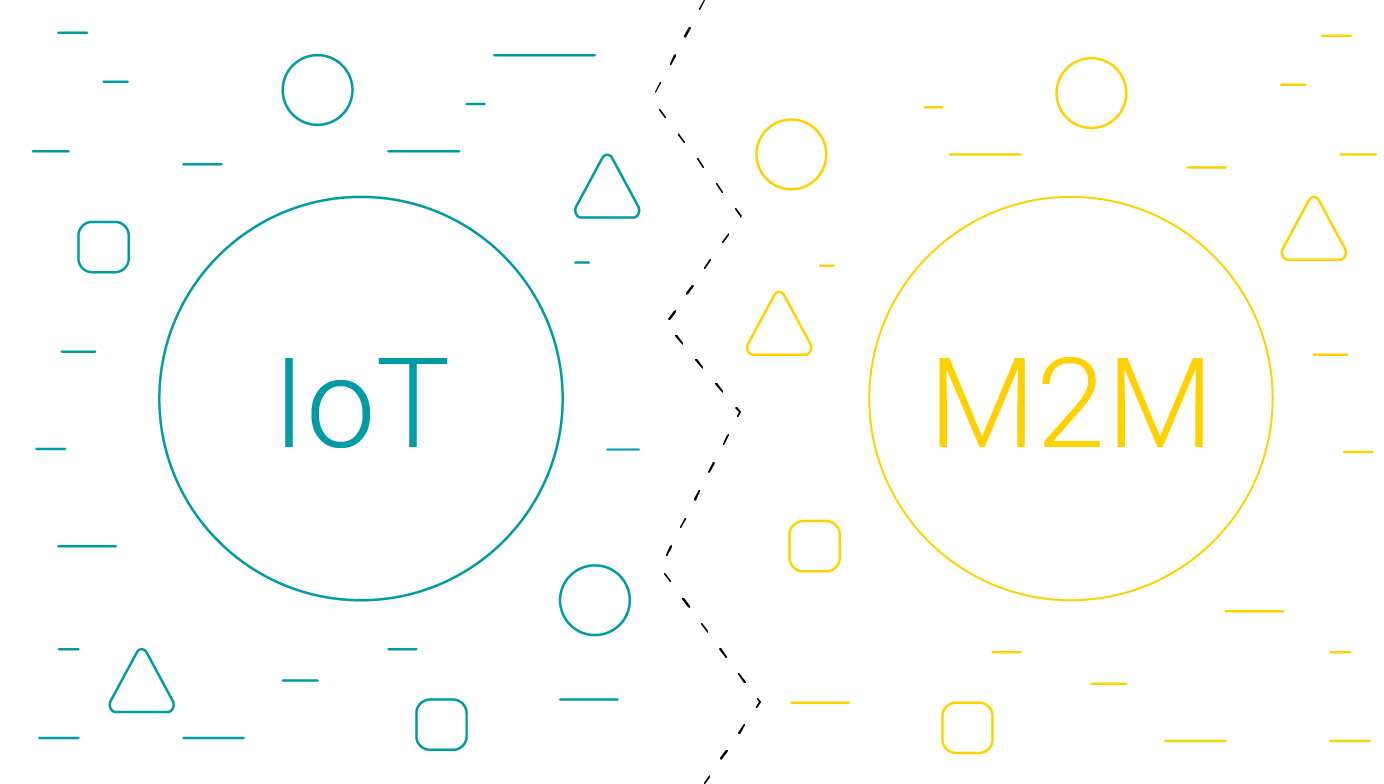 It seems that recently there has been as much hype surrounding the IoT as there is confusion in differentiating it from the M2M technology, especially in terms of IoT device management. This short overview will tackle the popular misconceptions and pinpoint some pivotal differences between these two technology buzzwords.

Understanding the differences between M2M and IoT

Whether at home, at work or in the street, we are constantly surrounded by IoT devices. The Internet of Things, probably the fastest growing phenomenon in the whole IT world, has already become a fully-fledged partner in our day-to-day activities, with smartphones, smart cars, smart coffee machines and an endless list of other smart appliances gradually making their way into our lives and starting to drive our future. Therefore, getting the hang of the differences between the Internet of Things and Machine-To-Machine (M2M) communication, which is the underlying concept that gave rise to the IoT as we know it, seems to be an essential element in understanding what the whole IoT scene is all about nowadays.

To fully understand the differences between M2M and IoT it's nice to first know what M2M is. Luckily, the definition of M2M is (seemingly) not that complicated: M2M, or machine-to-machine communication, derives from telemetry technology and generally refers to data exchange between various devices (usually) through the Internet without human participation.While many people, some IT know-it-alls included, often treat both terms as synonyms and use them interchangeably, it doesn’t necessarily take a rocket scientist to spot one basic characteristic that differentiates them. As predecessor to the IoT, M2M has been used throughout the decades as the standard technology in telemetry even before the invention of the Internet itself, as it involved an interaction between two or more machines without human intervention. The idea of the Internet of Things, on the other hand, having evolved on the foundations laid down by M2M, aims at offering much more functionality. It uses Internet connectivity not only to enable communication between a fleet of the same kind of machines, but also to unite disparate devices and systems in an effort to marry different technology stacks and deliver interactive and fully integrated networks across varying environments.

A real life example of this dissimilarity could be found in telemedicine. Let us imagine a solution that connects a sensor monitoring the heart rate of a patient to an external application which lets the doctor know the patient needs attention. Such kinds of solutions could easily be provided by the M2M technology. On the other hand, if we take a sensor and integrate it with an interactive pillbox that would advise the patient to take the medicine and, moreover, would be able to send alerts to their family members’ smartphones that the medicine has not been taken from the pillbox, it would definitely involve an IoT approach. To cut the story short, IoT could be viewed as M2M, but acting in a wider context.

Scale: The main difference between IoT and M2M

Bearing all that in mind, it seems that the whole discussion of differences could be quite conveniently boiled down to one word: scale. And very rightly so, yet there is much more to it than this.

Historically speaking, M2M technology harks back to the invention of two-way radio networks in the beginnings of the 20th century which fuelled the development of telemetry, a major industry area in which M2M has found numerous applications. With the rise of GSM data connectivity in the 1990s, M2M entered a new phase in its development, to reach its prime only in the first decade of the 21st century. The break-neck speed at which the Internet technology has been developing since the beginnings of the 2010s has recently forced M2M to give way to the IoT as the primary concept that is shaping the way we think about the future of business and our everyday life. To put matters simple, M2M typically relies on communication provided via either cellular or wired networks, which is quite restraining in itself, while the IoT can benefit from the more effective and open-ended IP-based networks and transfer the gathered data to cloud-based environments.

In addition to the differences in how remote device access is achieved by each technology, there is also the question of scalability. Quite understandably, IoT is inherently more scalable, since it encompasses a range of cutting-edge connectivity solutions to synergise disparate stacks of technology. In turn, these are usually driven by the M2M platforms. In this respect, M2M can be seen as IoT’s poor relation, offering limited integration possibilities, since the devices it connects must have a shared communication standard. 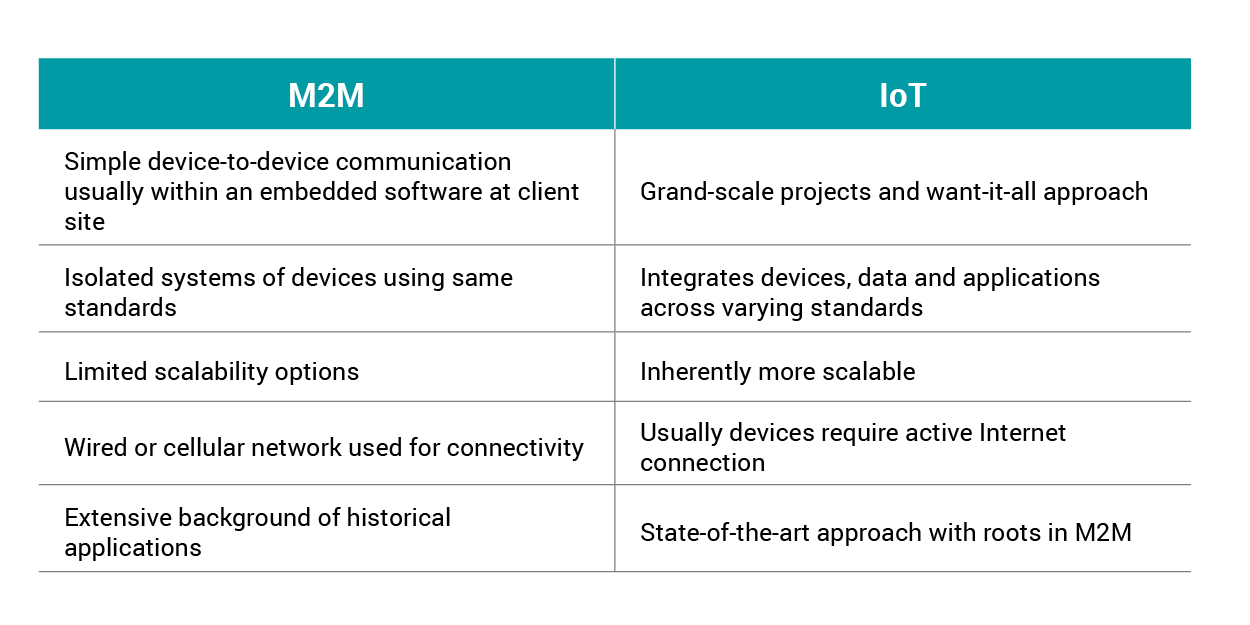 Differences between M2M and IoT

Bearing all the aforesaid in mind, it must also be noted that, with new M2M protocols such as Lightweight Machine-2-Machine (LwM2M) hitting the market and the new Internet-based connectivity solutions they employ, the lines dividing the IoT from M2M are beginning to blur. Thus, it may well be a matter of near future that we will see both terms acquiring the same meaning and eventually becoming synonyms.

In any case, it can be concluded that the IoT and M2M technologies are similar in that they both provide solutions for collection, storage and exchange of data between devices under minimal human supervision. What also unites them is the fact that they are increasingly closer to each other in matters of device management. With new solutions coming along, such as AVSystem’s Coiote IoT Device Management platform, which are able to provide an umbrella over the IoT and M2M device management strategies, the boundary between the IoT and M2M is growing ever less marked.

While it is true that the IoT has been largely based on the foundations provided by M2M solutions, it must be added that it has been improving on them ever since it was established as one of the main sources of innovation in the lives of individuals, businesses and whole societies.