How to choose the right IoT connectivity option? 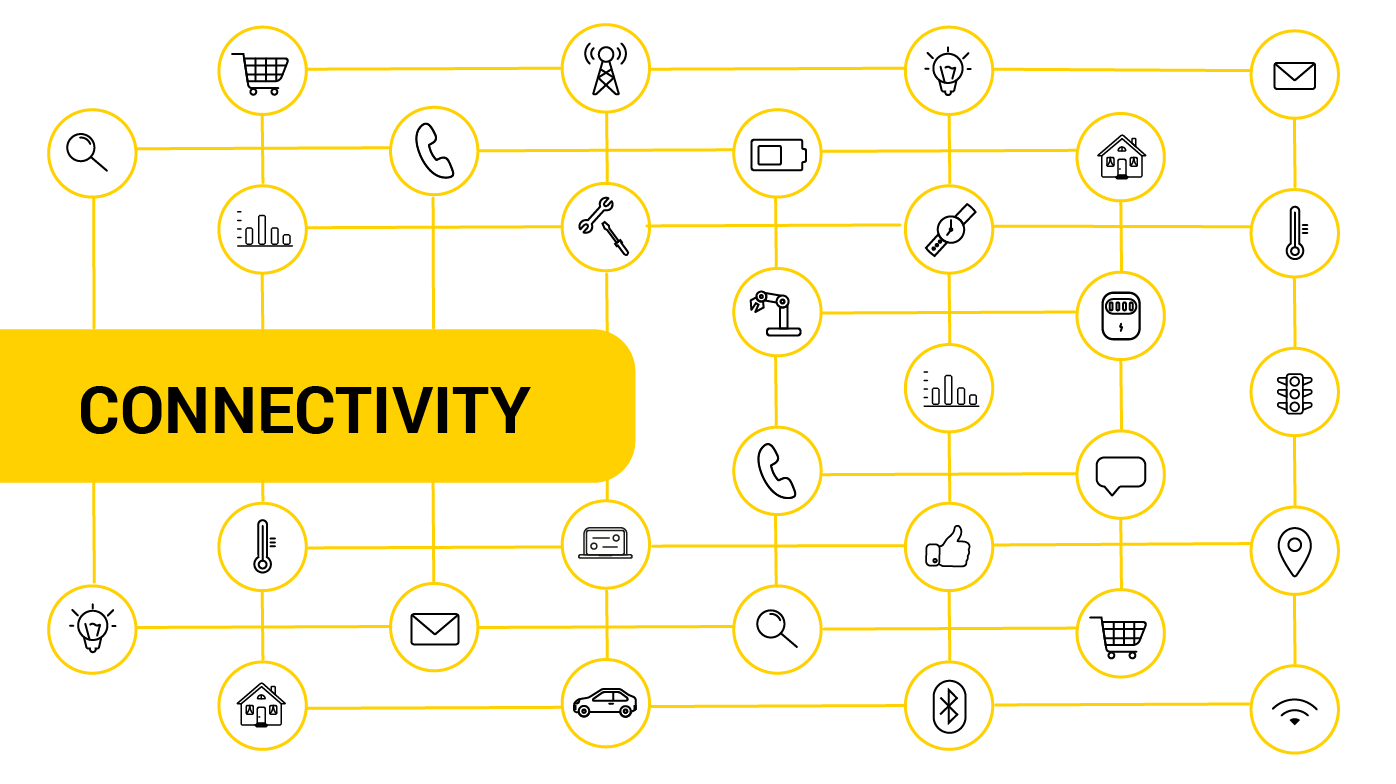 IoT connectivity is a term defining connection between all the points in the IoT ecosystem, such as sensors, gateways, routers, applications, platforms and other systems. It usually refers to different types of network solutions based on their power consumption, range and bandwidth consumption. IoT projects vary in their requirements and many of them use different connectivity options depending on their needs.

This short overview of IoT connectivity options will help you define your needs, inform your decisions and get your smart project on the right track.

Why is the selection of the right IoT connectivity option so important?

The simple answer is: because there is so much at stake. The Internet of Things, a monster technology that blends the virtual with the material to offer a smarter future, keeps attracting market players and investments with its limitless potential. As competition among both commercial and industrial IoT-driven enterprises soars, there is a growing need to seek for killer market differentiators that would give an extra edge to, if ever so slightly, get ahead of the competing crowd.

While improvement areas can be found in each and every aspect of an Internet of Things deployment involving the interface of Information and Operation technology, it seems that in case of connectivity, things tend to be taken for granted. With the existing popular wireless technologies such as cellular, WiFi and Bluetooth in place, many IoT actors overlook the importance of getting their IoT connectivity right, which ultimately may lead to a project failure due to the inability to tame the rapidly growing data deluge.

Therefore, paying careful attention to the right choice of connectivity is crucial to any IoT project’s success as it helps to take full control over your smart data streams. At the end of the day, it may turn out that connecting your assets by means of efficient and interoperable connectivity solutions may be just the differentiating factor that it takes to tip the balance of success into your favour.

Which communication option is the best for your IoT project?

With the overwhelming quantity and diversity of the available options, the constantly evolving IoT connectivity landscape is currently focusing on addressing the needs of data-intensive environments within customer and industrial Internet of Things applications alike. In an ideal world, the ultimate one-size-fits-all connectivity solution would offer extremely low-power consumption for the devices while retaining the ability to quickly transmit huge chunks of data over long distances, with all of this provided at prices low enough for the smart businesses to remain economically viable. However, given the inherent heterogeneity of use cases within the Internet of Things, the sad truth is that no existing or near-future communication protocol will be able to accommodate all the possible smart applications while granting them no compromises in terms of the above-mentioned crucial IoT connectivity factors.

Thus, finding the best solution for a given project always involves negotiating a balance between three fundamental connectivity parameters: range, bandwidth, and power consumption. Consequently, the ability to recognize your project requirements in every stage of its deployment and an in-depth knowledge of your IoT use case specifics will greatly support you in the process of choosing the best-suited connectivity network for your smart enterprise. Here’s a rundown of the most popular connectivity solutions applied in the Internet of Things to help you identify the trade-offs offered by the most popular network technologies.

Classic IoT connectivity solutions and beyond

With a long history of use going way back to the traditional M2M connectivity environments, wireless cellular communication remains the backbone for many IoT use cases and a popular choice among the Internet of Things service providers and device manufacturers. By granting the widest possible coverage with a whopping bandwidth to support it (and with 5G on the horizon), cellular networks are able to face the current challenges of streaming high-definition media to devices that are either connected to an electricity supply or easily rechargeable. However, with its battery-draining power requirements, cellular technology is not suitable for applications involving battery-powered remote sensor networks. On the other hand, with emerging cellular solutions such as NB-IoT, LoRa or Cat-M1 (to be discussed later in the article) specifically addressing the needs of IoT-driven enterprises, the cellular landscape keeps evolving.

When it comes to range, nothing can compete with the satellite Internet. It is an ideal solution for the so-called white spots – locations where it is difficult to find another form of network delivery. However, the advantages of this type of connectivity are not limited to the mere coverage issue. Satellite Internet has long been seen as a form of experiment – an extravagant solution associated more with ambitious plans by companies conquering space (and providing images from there via a network of satellites) than with the technology available to the average Joe. In truth, however, satellite is not only a solution for places with no connectivity – it is becoming an important alternative to other types of connections. Wherever it is difficult to find a fixed-line internet, be it due to logistics or geographical and financial limitations, the solution lies in the satellite Internet. The promise of global connectivity is especially attractive for IoT projects, as it can change environmental monitoring in the most remote places. While business cases for satellite operators are getting more and more interesting, we are still waiting for first successful deployments. Who knows, maybe satellite connectivity will be a game-changer for the entire IoT industry?

With transmission capabilities at frequencies of 2.4 GHz or 5 GHz, the WiFi signal is able to carry significantly more data, yet, of course, this is offered at the expense of very limited range and huge power consumption. As a result, the Internet of Things has been using WiFi connectivity extensively in short-range applications that don’t fear huge power drains, such as home automation systems. However, the recently developed WiFi standards HEW (802.11ax) and HaLow (802.11ah) are more IoT-oriented, addressing the range and power-related challenges of industrial IoT environments.

Similarly to WiFi, Bluetooth has been widely used in consumer electronics to provide a high-bandwidth connection for wearable devices. However, in contrast to WiFi, Bluetooth uses lower energy and takes much less to establish a connection between two devices. Thanks to it, it has become widely used not only in IoT-related consumer electronics, but also industrial settings, for example in indoor asset tracking, where limited range isn’t of much concern. Its ease of setup and low signal interference capabilities in frequency-crowded environments makes Bluetooth a great choice for many other smart indoor applications where GPS asset localization is not an option.

Ethernet is a technology that connects wired local area networks (LANs) and allows devices to communicate with each other. In addition, Ethernet works as a protocol that controls the data transmission processes over the LAN. For instance, it defines how network devices can transmit and format data packets so that other network devices on the same network segment can receive, process, and recognize them. If we decide to use the Ethernet standard, we must physically connect the devices with each other using cables, e.g. a router with a computer. It is an optimal solution if you care about a really high speed of downloading and uploading data. The use of an Ethernet cable eliminates problems with signal fading and drops in data transfer speed. In the wireless IoT age we live in, Ethernet still serves a purpose in video transmitting devices (e.g. cameras), robotics,  medicine or autonomous vehicles due to high bandwidth and low latency requirements. 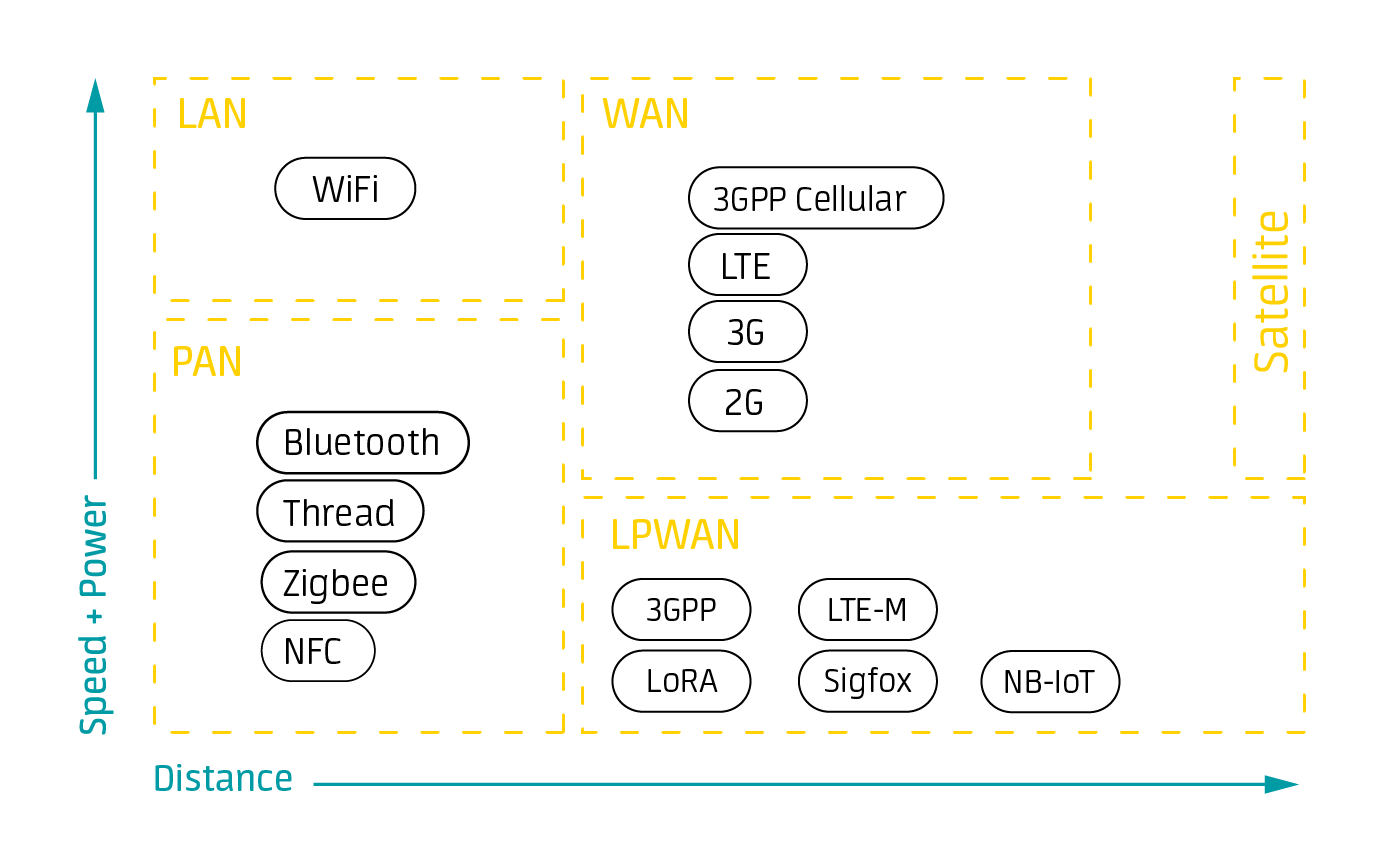 LPWAN is the new black

Although based on cellular communication, Low-Power Wide Area Network should be set apart from it as a distinct IoT connectivity technology. Why so? Basically, it addresses a more distinct set of IoT connectivity needs than the traditional cellular network. LPWAN is a new worldwide connectivity standard dedicated for smart systems of resource-constrained devices spreading over wide areas and requiring minimal power consumption. Seeing a huge potential of Low-Power Wide Area technologies, major global network operators are busy developing their proprietary solutions (Sigfox, NB-IoT, LTE Cat-M1, LoRa and others) ,which benefits other players – such as mobile virtual network operators – as well. It’s also beneficial to the growing Industrial Internet of Things market, as more and more IIoT applications are possible thanks to the economy and practicality of this type of technology. Offering an impressive coverage of up to 40 kilometres and enhanced battery life for low-power sensors and devices, LPWAN is a perfect match for industrial IoT applications involving smart metering, intelligent buildings, city infrastructure, and agriculture, among many others. With great geolocation capabilities, LPWAN is also able to identify the whereabouts of devices without the help of GPS, using radio signals instead, which makes it a great cost-efficient option for localization and tracking capabilities. 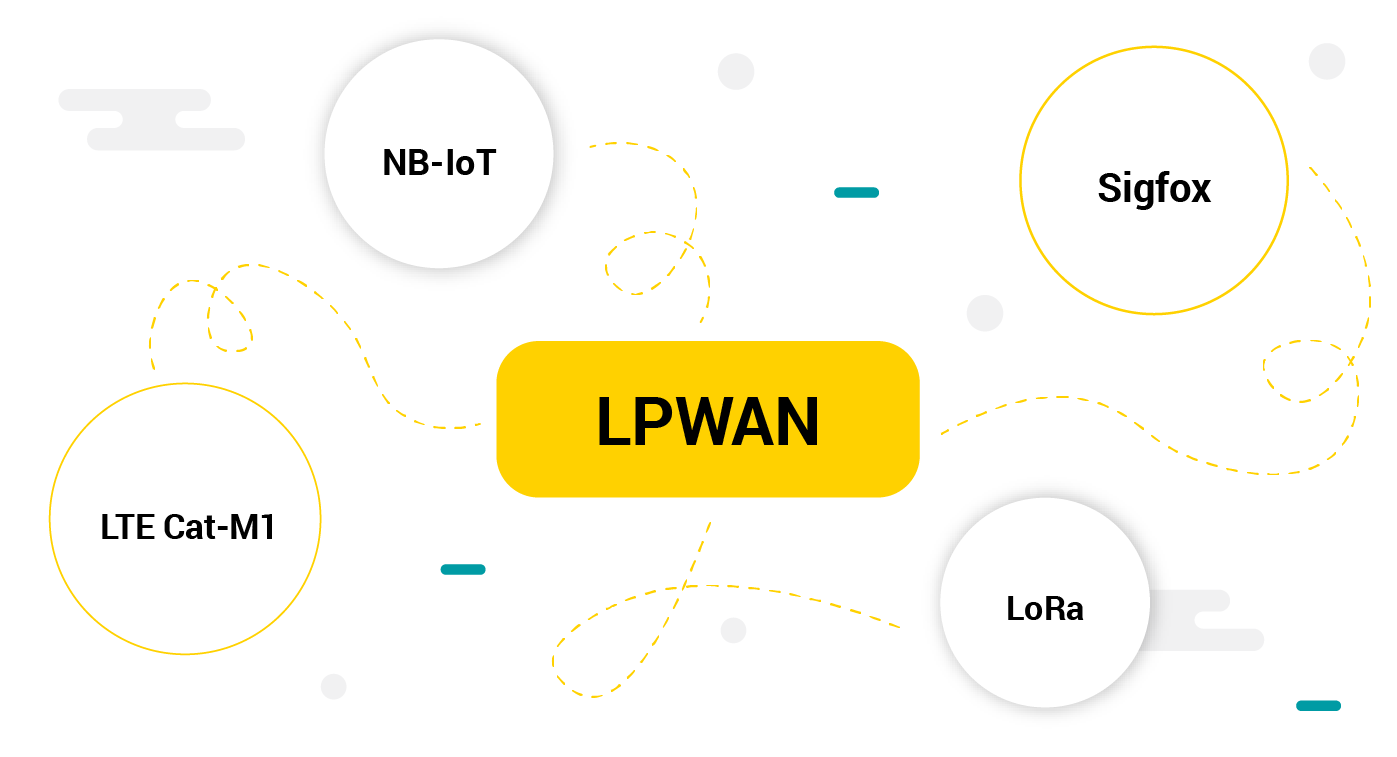 The disruptive and raw power of the Internet of Things makes connectivity technology develop at ever higher rates to provide for the soaring demands of new application scenarios. However, no perfect universal solution has emerged that would support all the IoT-related technological and analytical challenges. Therefore, the focus in choosing the best IoT connectivity option must be placed on the specificity and requirements of given use cases.

While it takes tons of time and capital along with all the hardware, software, technology, and expertise to envision and create a promising Internet of Things project, the failure to provide its devices and services with the right means of communication may reduce the whole smart stuff to a hapless bunch of gimmicky, disconnected and, ultimately, useless things. The easiest way to avoid that is to listen to the market’s heartbeat, identify the particular needs and limitations of your IoT enterprise and let this knowledge inform and drive the decisions about the choice of the best-suited IoT connectivity option to make your smart deployment even smarter.