LwM2M vs MQTT: What's the difference? Which one is better for IoT 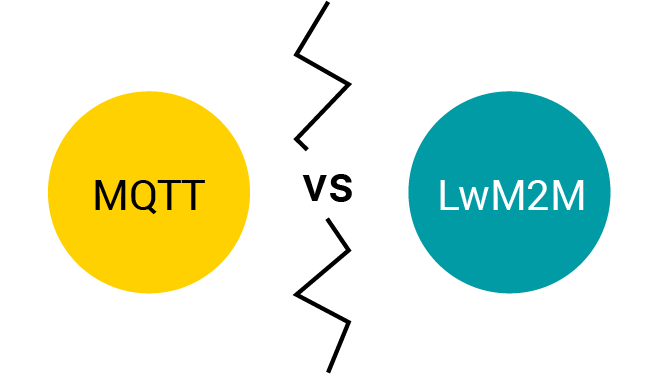 Just as smart things lie at the very core of the Internet of Things, IoT device management is the centre of gravity for every IoT deployment. Therefore, the choice of an IoT protocol has the potential to make or break most IoT projects. However, with so many IoT protocols to choose from, it’s not an easy task to find the one that will answer the needs of your deployment.Here’s a comparison between LwM2M, a leading standard for the management of (not only) resource-constrained devices, and MQTT, a popular messaging protocol that offers a standard method for transferring device data to systems and other devices.

For starters, both MQTT and LwM2M are standard protocols for the transportation of data from devices to other devices, systems, platforms and applications. Here, let’s not overlook the word ‘standard’ from the previous sentence — in the fragmented IoT world of proprietary systems and vendor lock-ins, standards are like safe islands in a sea of smart chaos. By having their own working groups dedicated to specifying and standardising them, they have become widely accepted standards and are enjoying vast popularity in a variety of IoT projects. Lightweight and easy to implement, both are well-suited to low-power resource-constrained devices operated over low-bandwidth networks. This is about where their common points end, so let’s have a look at the differences.

One thing should be made clear before anything else: while Lightweight M2M is a CoAP-based protocol that has been especially intended and designed for device management in the Internet of Things, the Message Queue Telemetry Transport is, in its essence, a publish/subscribe-based communication protocol that can successfully support data and proprietary DM payloads in IoT. This is especially important in the context of protocol functionality: LwM2M comes with a well-defined data and communication model, offering a variety of ready-to-use standard objects (OMNA, IPSO, GSMA Objects), connectivity monitoring, remote device actions and structured FOTA and SOTA updates, whereas in MQTT these features are entirely vendor- and platform-specific. What follows is that with MQTT, firmware updates or any other management features must be created from scratch. Contrastingly, LwM2M offers firmware upgrades as one of its basic functionalities, so there is no need to invent any new building blocks for communication. Thus, as the protocol’s name itself suggests, MQTT has been intended and is primarily used as a telemetry protocol, though sometimes serving as a basis for developing proprietary DM functionalities. LwM2M, on the other hand, has the upper hand of being a protocol for the management of devices which can also be successfully applied to telemetry use cases. 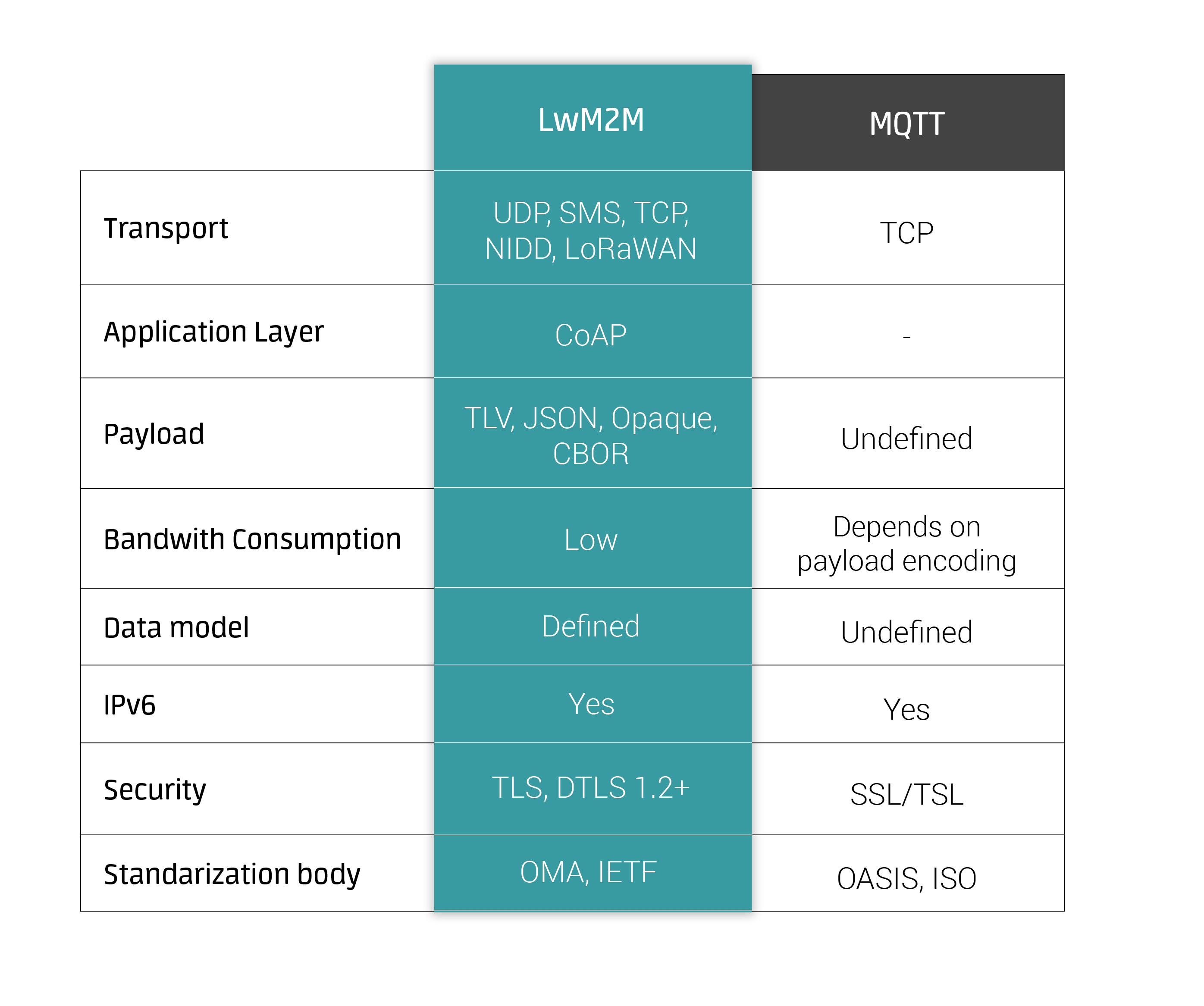 Another thing in which both protocols differ is their approach to the issue of data processing times. With MQTT, data transfer can be very fast, enabling to take actions in real time, but again, it all depends on the network architecture and system complexity. By using UDP as its transport layer, LwM2M can have similar or even better response times while still offering more robust architecture. Thanks to this, it is able to manage more resource-consuming embedded devices which benefit from more effective communication while offering better performance in terms of responsiveness.

When it comes to security, MQTT obviously offers no built-in security features, but can even handle the full TLS protocol if needed (which, however, adds significant network overhead and results in some drastic trade-offs on speed, lightness and functionality). On the other hand, while LwM2M offers similar features in terms of transport-layer security (natively supporting the DTLS 1.2+ and TLS 1.2+ protocols), it additionally ensures end-to-end application-layer security by using OSCORE. It needs to be added that all of this is done without stifling the LwM2M protocol’s performance.

Which protocol is best for your IoT project?

One thing that MQTT can boast of is a long history of use, going back well into the beginnings of the 21st century, and as such, it has been widely applied in telemetry, machine industry or agriculture long before the emergence of IoT as we know it. At the other end, there is LwM2M with its fresh, state-of-the-art architecture co-developed by IoT industry practitioners, reinforcing its market position in leaps and bounds.

Despite numerous dissimilarities, both protocols are well-suited to resource-constrained device management environments. MQTT might be a good match when applied within IoT ecosystems that involve low variability of system components while not prioritising such concepts as loose coupling, auto-discovery, or protocol convergence. On the other hand, the well-defined object model and simple but efficient architecture makes LwM2M a perfect choice for more complex, long-term and large-scale IoT use cases involving heterogeneous hardware deployments. Moreover, if you want to avoid vendor lock-in and ensure interoperability to your project, you’d better go for LwM2M. If you don’t mind being stuck with one vendor throughout the entire project, you’ll be fine with MQTT. In terms of your project’s time to market, LwM2M is far ahead of MQTT, simply because it offers instant deployment capabilities, whereas MQTT usually requires building a device ‘language’ for each and every project separately.

As device management is the beating heart of the rapidly burgeoning Internet of Things, the importance of IoT protocols shouldn’t be overlooked. Selecting the right protocol for your IoT enterprise can be a key market differentiator that will help you get ahead of the competition.