What is an Internet of Things platform? 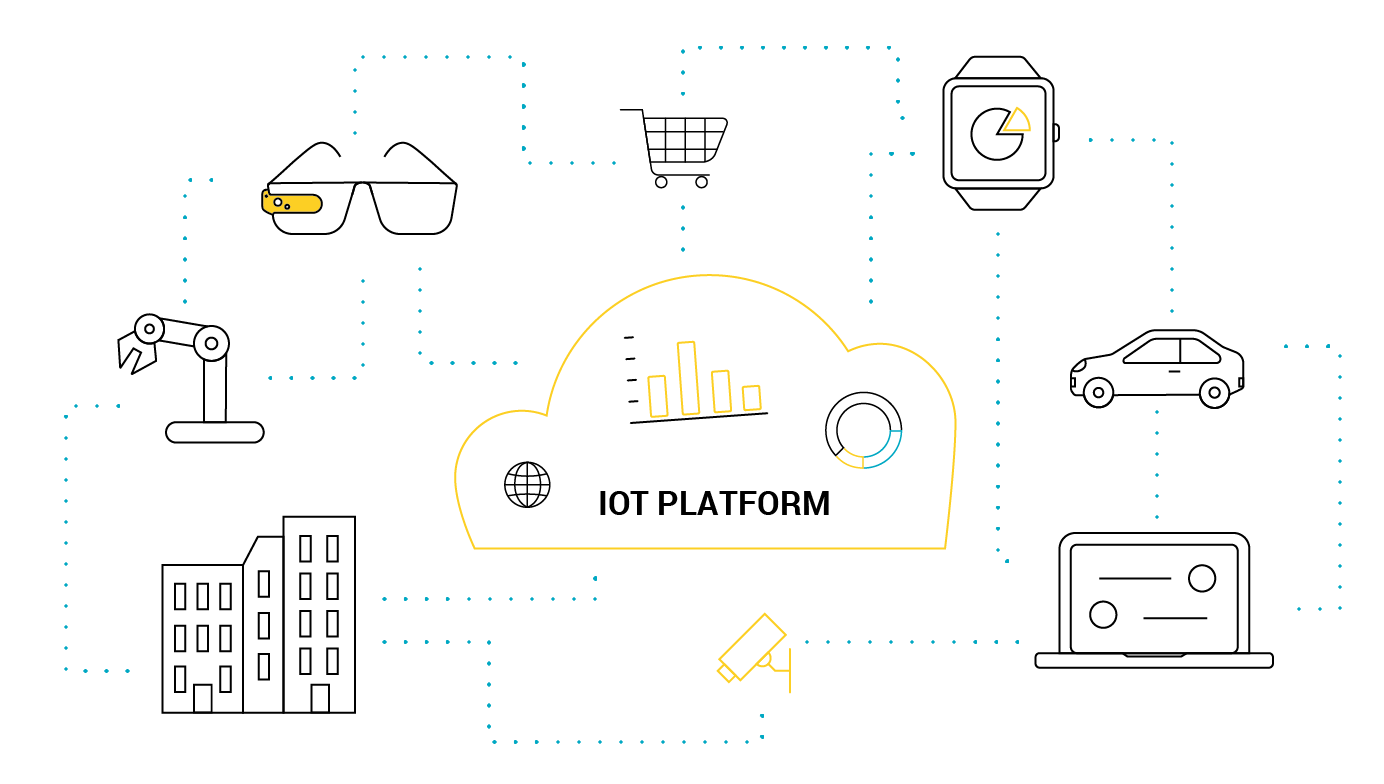 In the maelstrom of terms and definitions whirling around the booming phenomenon of the Internet of Things, it is easy to get things twisted and miss the point. This article will help you to wrap your head around the question of ‘What is an IoT platform?’.

Basically, it can be said that an Internet of Things platform is the main place where the actual IoT magic happens. An IoT platform is at the heart of every IoT deployment, bringing together the hardware, connectivity, software and application layers to offer an efficient solution for device management and configuration, data collection and analysis, enablement of applications as well as connection with the cloud or on-site server. But before we go into the details behind the Internet of Things platform, let’s have a look at the basic components that make up every professional IoT system.

These are machines, sensors, actuators or other connected gear intended to perform given actions, including but not limited to: collecting data from the environment, communicating with one another, carrying out operations, transmitting and receiving data to/from the server/cloud.

Based on telecommunication networks, this is the channel through which the devices ‘talk’ to one another and communicate with / receive commands from the server/cloud. Depending on the given IoT project’s requirements and limitations, the connectivity solution provided must offer features that best address them. Among these are: reliability, network agility, security, as well as other performance parameters such as power consumption, range, and bandwidth.

Hosted in the cloud or on an on-site server, the software collects the data sent by the devices, analyses it and makes independent decisions about actions to be performed within the IoT system.

Providing the user an insight into the workings of the whole system and offering ways to interact with it, the main task of the application layer is to visualise the information received from the software and present it in a user-friendly way.

Often referred to as IoT middleware, the Internet of Things platform is a mediator between the application layer and the hardware. Generally, the main purpose of an IoT platform is to overcome the obstacles that exist between the individual layers of technology (including lack of interoperability, standardization, security and others) and combine them to ensure their efficient and seamless cooperation.

Given the fact that the world of IoT is almost as fragmented as it is boundless, the Internet of Things platforms have evolved into many different types of solutions to address the heterogeneity and diversity of demands of specific IoT-powered industries. Therefore, IoT platforms can be characterised and assessed according to some general features that they represent. Taking into account the main factors that may affect the performance of a given IoT platform, such as scalability, ease of use, security or interoperability, the following categories can be distinguished:

The most advanced Internet of Things platforms allow scalability at any endpoint the client may need, offering the maximum performance of device connectivity regardless of the circumstances.

This criterion about the IoT Platform is often closely related to the flexibility of the integration APIs and the ability to control the code. This feature of the IoT platforms is essential for all those developers who need to customize some of the functions of the device and its applications or, on the contrary, develop additional modules.

Designed to work in heterogeneous real-life IoT ecosystems, every IoT platform by its very nature has to support hardware and software-agnostic features. In other words, inevitably it has to provide possibilities for an effective handling of multiple types of devices over multiple types of communication protocols to feed data into the cloud or in-house servers. Handling a variety of hardware and software communication protocols is essential in every professional IoT deployment.

Deploying the IoT Platform technology is an important point for any company, hence it should give the possibility to be deployed in the cloud or, if you want to ensure greater privacy, in an on-site server.

This criterion includes the encryption of the information transmitted between the devices and the server via a variety of communication channels, the control of user access as well as the ownership of the processed data. What poses a great challenge nowadays in terms of IoT data security is the lack of over-the-air update functionalities in some older IoT systems.

It is generally agreed that the number of Internet of Things platforms on the market has already exceeded 400. With that said, it is essential to realise that it is device management that is a central part of every IoT ecosystem. In the sea of choices, enterprises have to focus on their individual business needs and make an informed decision on the basis of a thorough analysis of the products offered on the market, which isn’t a simple task given the diversity and multiplicity of the solutions.

Combining all the benefits of Coiote IoT Device Management and Coiote IoT Data Orchestration, the Coiote IoT product suite covers the most important aspects expected from the top-class IoT platform.