Why so many IoT projects fail? 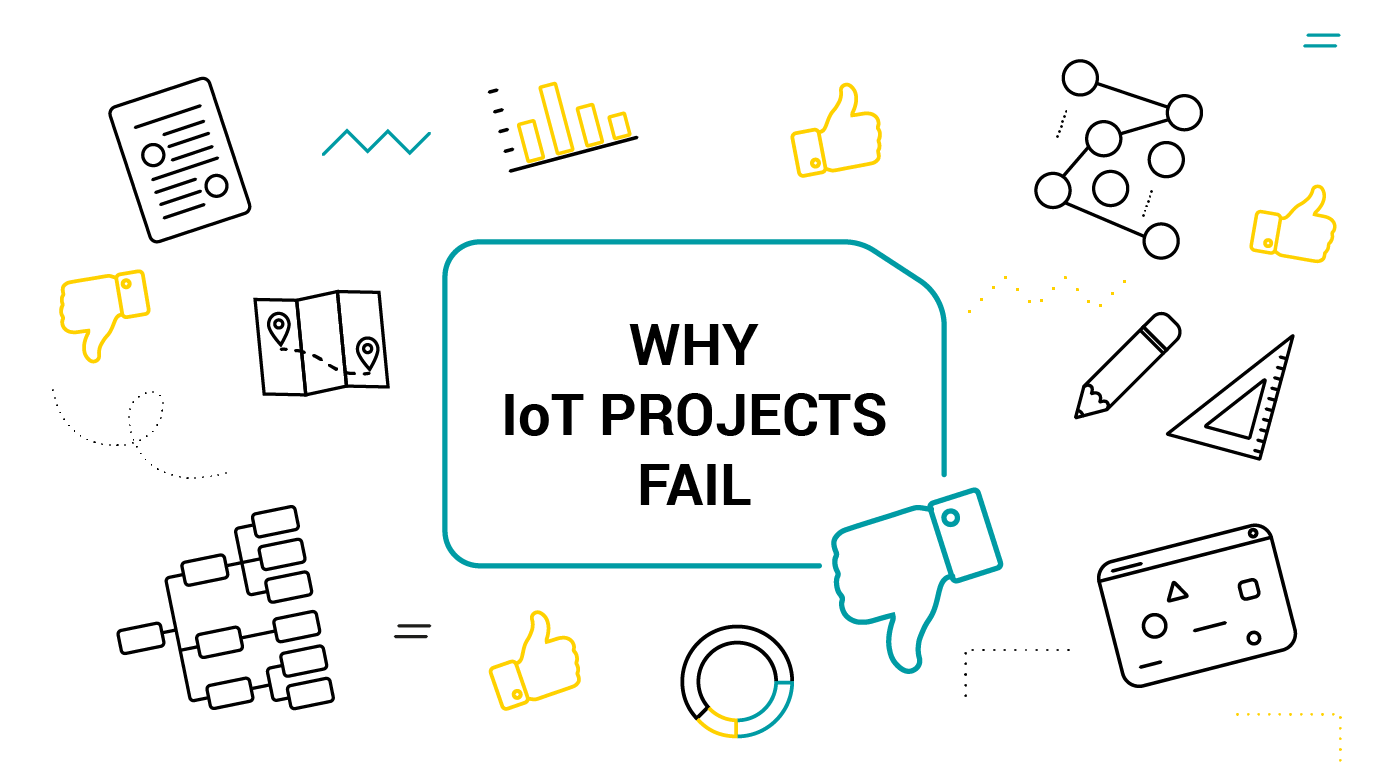 Even more than 50% of smart deployments become stalled at the conceptual phase, which sadly makes some really promising IoT projects fail.

These grim figures may be puzzling, especially due to the fact they still don’t deter industries from getting involved with IoT technology, as there is growing awareness among the investors that the Internet of Things offers the sharpest competitive edge and is overwhelmingly beneficial if properly adopted. However, in diagnosing the reasons for IoT project failure, it is crucial to realize that it is not the technology itself that should take the blame in the vast majority of cases. Looking at IoT tech stack as just one part of a greater picture, it becomes evident that it’s not necessarily about the software choices or device architecture, but rather about the intangible aspects of the whole enterprise: in-company vision, strategy, and collaboration.

In other words, IoT projects may look nice and easy in theory, and this can be true enough but only when they are tackled with care, without haste and in a holistic approach. Without a solid foundation to build on, they often turn out to be more complex than estimated, once the ideas must be put into practice. Below, you’ll find a rundown of the most common Internet of Things project pitfalls and how to avoid them.

No clear definition of IoT use case

First of all, IoT projects fail due to the lack of a well-defined, business-oriented and coherent vision. Introducing technology for technology’s sake, not caring to align it with the company’s profile and diving in headlong into IoT without a cool calculation of the opportunities and obstacles are all among the most popular sources of IoT adoption-related problems. Here’s what you can do about it:

It is crucial to evaluate your project’s desirability for end users, whether they’re your coworkers or customers. Take time for thinking about the possible application scenarios, target groups and real-life problems to be solved in order to ensure that your use case addresses actual or future critical needs. Ill-defined or underdeveloped use cases tend to ruin the whole effort as ultimately they may become useless simply due to lack of end user interest.

To put it in plain words, you have to be perfectly aware of what you want to achieve with your smart project and make sure it’s aligned with the company’s mission, goals and strategy. Otherwise, one of these days you may find the project diverge towards a path your company’s executives don’t want to follow, ending up with no support or enthusiasm from the management side.

…and stick to making everything to achieve them. No matter how innovative or clever the IoT solutions are, if they don’t bring real value and fail to capture business opportunities, they’re becoming just another useless gimmick that will be ditched sooner or later. Therefore, it is imperative to invest time and effort to make sure that your smart tech deployment brings useful business insights into your enterprise and value for the customers.

Lack of a strong project roadmap

Once the specific use case has been envisioned, you can go on to develop a roadmap for your project. Among the most popular success factors cited by early IoT adopters, a rock-solid IoT business plan (along with a consistent stick-to-itiveness) is considered indispensable. While it is no secret that letting business decisions be driven by spur-of-the-moment impressions may be very risky, it is often the case that the positive hype and enthusiasm surrounding the Internet of Things has the power to overexcite even the most down-to-earth chief tech officers. By making the below points the top of your list of project priorities, you’ll be able to counteract this tendency and reduce the risks to an absolute minimum.

Meeting tight deadlines can be tricky, especially in the context of long-term, large-scale and complex deployments. A two-year horizon for your project sounds like a safe plan, but things might get complicated as the management becomes impatient with still no tangible outcomes of the whole undertaking. Similarly, cutting corners just to get the project working within a few weeks is likely to hamper a successful IoT adoption. Therefore, keeping a balance between being realistic and quick in terms of an IoT project timeline is definitely a make-or-break factor. If there are any plug-and-play solutions available that match your project’s assumptions, it might be a good idea not to try to reinvent the wheel and go for reliable and proven IoT tools.

Among the top challenges in IoT adoption, data quality is the one that really needs special attention. After all, poor data is what makes wrong decisions. By developing a proof of concept, you’ll be able to assess what kind of data exactly you need and how to gather it effectively. Also, skimping on device costs by deploying the cheapest sensors is not recommended, as sub-par data quality that they provide may bring down the whole initiative.

When devising a realistic budget for your IoT, any risks should be identified, taking into account different, often unfavourable scenarios, such as: steep initial learning curve, longer completion times, unexpected costs generated by man-made errors or unintended scope creep. Therefore, when calculating deployment costs, be sure to include a safety margin as that will enable you to cover any unaccounted expenses along the way.

As security is becoming a global issue not only within the Internet of Things, the industry has already started to focus its efforts on addressing the security challenges involving smart devices. Thus, it seems that the secret to a safe IoT environment largely lies with a well-deployed device management. These days, features such as firmware-over-the-air updates and strong data encryption are a must, as they keep your devices safe in case of bad actor attempts. Therefore, you should look for solutions that offer comprehensive device management capabilities, fit-for-purpose protocols and enhanced device security features.
Also, keeping your IoT ecosystem as uncomplicated as possible is a good idea; the more complex a deployment is, the more vulnerable it becomes.

Missing the right people and mindset

As mentioned earlier, what makes IoT projects fail is not technology itself, but people that implement it. Since nobody is perfect (IoT experts included), there is quite a list of things that could potentially go wrong in an IoT project. Yet, by addressing the most common IoT misconceptions within the organisation, evangelizing about the benefits of smart tech to your colleagues and supervisors, and, lastly, gathering a pack of IoT enthusiasts and professionals to help you along the way, you’ll be able to avoid the common early adopters’ mistakes that make their IoT projects fail.

Without communication, there would be no Internet, let alone IoT. Therefore, it is so vastly important to make the company aware of what you’re trying to achieve with the ongoing project by clearly communicating your ideas, goals, and expected outcomes. Also, encourage integration across teams. Every IoT system consists of several closely connected components that work interdependently of one another; thus, it is crucial that teams maintain precise communication on a daily basis to avoid creating silos which are a major killer factor of promising IoT ideas.

If your IoT project faces a situation when there is no buy-in from the company’s executives, try not to get too panicky. The most probable reason for this is twofold: they either don’t realize the real benefits behind IoT adoption, or cannot see them on their immediate horizon. Evangelizing about the advantages and presenting your roadmaps for IoT development should be enough to do the job.

It is true that IoT projects are often demanding. They require expertise and skill sets not always found within all organisations, even those IT-related. So, if you lack people with enough experience and expertise to support you, instead of relying on your shaky in-house talent reservoir, hire external contractors to bridge the skills gap.

As the most disruptive and dynamically expanding technology to date, the Internet of Things is a challenging but rewarding opportunity for each and every industry nowadays. While the market has seen a number of poorly prepared IoT projects fail, the Internet of Things still keeps attracting a wide range of industries and business sectors. After all, weighing the enormous advantages against the pessimistic statistics, it becomes obvious that smart technology is the medium to empower and transform businesses for those willing to take risks and gain a unique competitive edge.

Therefore, don’t let fear of failure hold you back. Once your objectives are clear and roadmaps done, keep a close eye on your in-company IoT awareness, team expertise and management support. Then, there will be no more stumbling blocks left in your way to reversing the negative trend, getting past the IoT hype and making your IoT project a success.