Cellular IoT: What is the difference between NB-IoT and LTE-M? 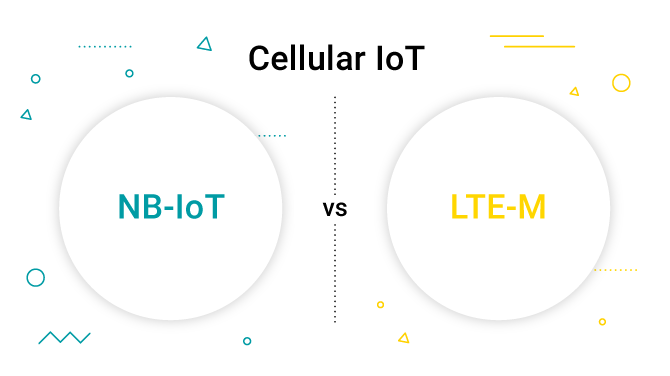 On the verge of the third decade of the 21st century, it becomes more and more obvious to say that the Internet of Things is one of the driving forces behind the concept of Industry 4.0, enhancing automation, data collection and analytics to optimize processes and workflows across the industries, but also influencing our daily lives way more than we have expected it. The change touches each and every plain of modern life.

Throughout the last years, analysts have highlighted the rapid growth within the Internet of Things sector, estimating that around 41.6 billion things will be connected by 2025 globally, generating traffic volumes of around 80 zettabytes (!). Much of this growth, according to studies, will come from the cellular IoT; that is, the devices connected using the mobile network infrastructure that we use on the daily basis when transmitting our voice or data to and from mobile devices, like smartphones.

But the numbers alone do not tell the full story. One of the factors behind the popularity of cellular IoT technology is that it enables piggybacking on the existing dense and reliable GSM infrastructure, which means improved performance and economy at the same time. Yet it must be made obvious that the standard and well-established cellular options, such as 2G, 3G, or LTE are highly power-hungry and thus do not go well with the usual IoT applications, where only small amounts of data are sent intermittently, such as smart meters, agriculture sensors and actuators, asset tracking devices, smart healthcare gear, and many more. 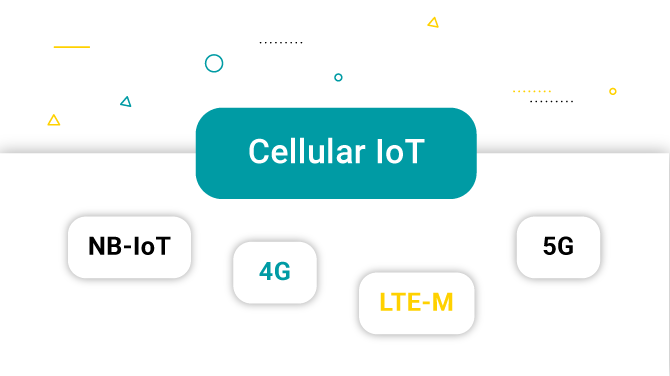 And since there’s no doubt that cellular IoT is the part and parcel in the development of the Internet of Things landscape, then what is it exactly and how does it solve the challenge of resource-constrained IoT devices? In simple terms, it’s a way of connecting smart things using the existing GSM, UMTS, LTE and (prospectively) 5G infrastructure, which gives a lot of benefits, as well as some challenges. It is also an overarching category for a set of IoT connectivity standards that are designed to take the cellular technology available today and level it up to make it fit the requirements of low-power and energy-saving devices, such as smart sensors, actuators or microcontrollers. Among such IoT-driven solutions belonging to the cellular IoT family, NB-IoT and LTE-M are the leading standards.

We have highlighted the importance of cellular technology within the IoT landscape in the years to come, but one question still remains open: what are the differences between NB-IoT and LTE-M and why should these really be a point of interest for IoT project stakeholders? The answer lies in the details.
Let’s assume that cellular IoT technology is the best-suited solution for the needs of your IoT venture – be it smart metering, asset monitoring and management, agricultural sensors or similar. While no single technology is perfectly matched to the vast variety of potential IoT applications, market circumstances or spectrum availability, it is the particulars that tip the scales most often. And, needless to say, such decisive details are only visible after researching the differences and similarities of the options in question. 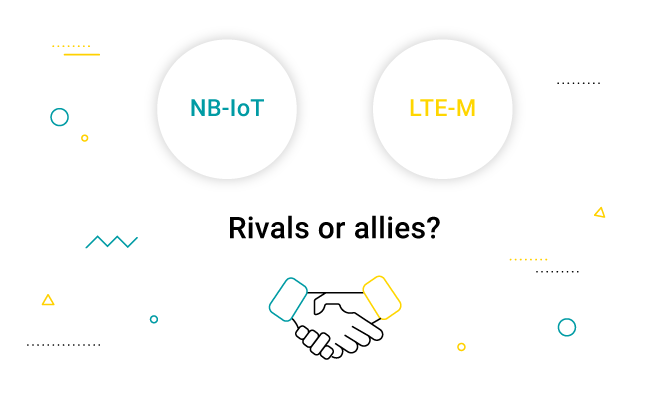 Therefore, it should be noted that although NB-IoT and LTE-M are highly complementary cellular IoT solutions, they address different types of use cases based on the intensity of the capabilities of the two technologies. Even slightest differences in performance and data plans of each technology can have a huge impact on the operation of any IoT project implementation, whether it’s a small-scale deployment or a multi-million device fleet.

But in order to be able to break down the differences between these two low-bandwidth cellular IoT standards, it’s better just to start by analyzing the similarities that unite them.

Both LTE-M and Narrowband IoT are:

Judging from the list above, it seems that the features that LTE-M and Narrowband IoT share are prevailing and that the two technologies are next to synonyms. But it is not quite so; the difference between them lies in a few key parameters, and again, those are in fact the make-or-break factors in the decision process of choosing the right cellular IoT connectivity option for your deployment.

What are these key differences then? For simplicity and ease, let’s classify them in some neat and useful categories according to their key performance parameters.

While both cellular IoT options in question operate within the licensed spectrum (which is the portion of radio signal spectrum designated by the communication authorities for use by licensed organizations), the bandwidth of the former is 1.4 MHz, the latter offers no more than 200 kHz. What that means in practice is that the smaller bandwidth of NB-IoT typically translates into longer ranges while negatively impacting throughput. Therefore, thanks to its broader bandwidth, LTE-M gets a little less range but significantly higher throughput.

Talking about throughput, which is the measure of how effectively the bandwidth is utilised, there are two basic terms: downlink and uplink. Downlink (DL) is the transfer of data from the base station down to the device; uplink (UL), on the other hand, is traffic from the device up to the base station. These two parameters are much higher in the case of LTE-M, which boasts up to 300 and 375 for DL and UL respectively, with peak rates of even ~4 Mbit/s (according to Release 14 specification). As for Narrowband IoT, the numbers are significantly more modest: while some tests reported maximum transfers of up to 250 kbit/s, it is normally assumed that the DL and UL for this technology are 30/60 kbps respectively.

Ranges for both cellular IoT technologies depend largely on the methodology, terrain conditions and purpose of the tests that have been performed. While the maximum numbers for each clock at as much as 100 kilometres, in typical operation the kind of range that you may see in your devices are a way lower, reaching 15-20 kilometres on average in case of LTE-M and up to 35 km for the Narrowband Internet of Things technology, yet with no trade-offs on the efficiency of data transfer.

Mobility means seamless handover between base stations and cell selection, so it involves the ability of the devices to automatically detect if they're getting too far from a base station and connect to another one in an uninterrupted way. Handover is also supported by both cellular IoT protocols, and works just like in LTE-enabled smartphones: for instance, when driving on a highway and talking to a friend, a failed handover causes the connection to break. As for international deployments, roaming is possible with LTE-M, so that moving from one operator (MVNO) to another is possible. On the flip side, this feature is not yet in place for NB-IoT, as it is still typically dependable on each operator’s core network to relay data to and from the cellular IoT-enabled device.

With both of these technologies, battery lifetime is extended to extremes. According to studies, it is possible to achieve even 15 years of battery lifetime, of course depending on the specificity of the IoT project requirements. Still, where there are higher transfer rates possible, as in LTE-M, the batteries will be drained much faster, so NB-IoT will be the obvious choice for the projects where the economy of battery lifetime is more important than data transfer speeds.

The typical applications of both connectivity solutions depend largely on the main points of strength that each of the technologies has. As for LTE-M, here’s an overview of its advantages along with some use cases they are suited to:

Such a range of strong points makes LTE-M the natural leader in the following IoT industries:

On the flip side, the strengths that you get with NB-IoT are:

With such advantages on board, Narrowband IoT is best suited in the following fields: 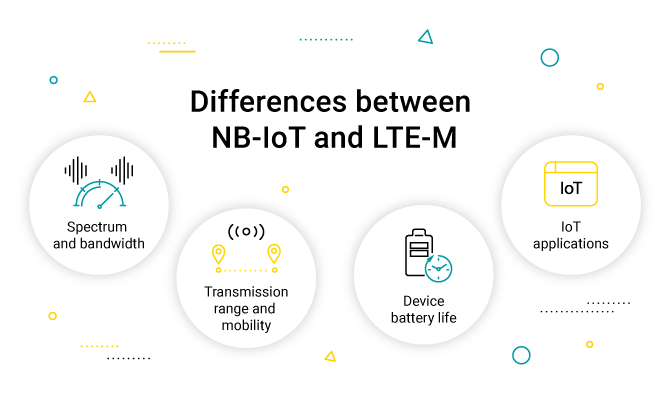 Once you have sifted through the details of possible options and have your mind firmly set on a particular cellular IoT, it may be the time to focus your search on another crucial aspect of a budding IoT deployment which is the choice of a IoT device management platform. Also – useful pointers on how to choose the best IoT Platform.

The choice’s up to you

The Internet of Things offers a whole lot of deployment possibilities, technologies and solutions. Add to it the sky-rocketing pace of development of the IoT landscape, and it is easy to lose track of where the market is going and take the wrong turn. Before you decide on a solution, whether it’s cellular IoT or any other, try to learn all the ‘hows’ behind the ‘wows’, carefully consider its strengths and balance them against the specific requirements of your project, for the IoT devil is in the detail. All this, and a slight pinch of luck, will surely turn your IoT adventure into quite a profitable trip.