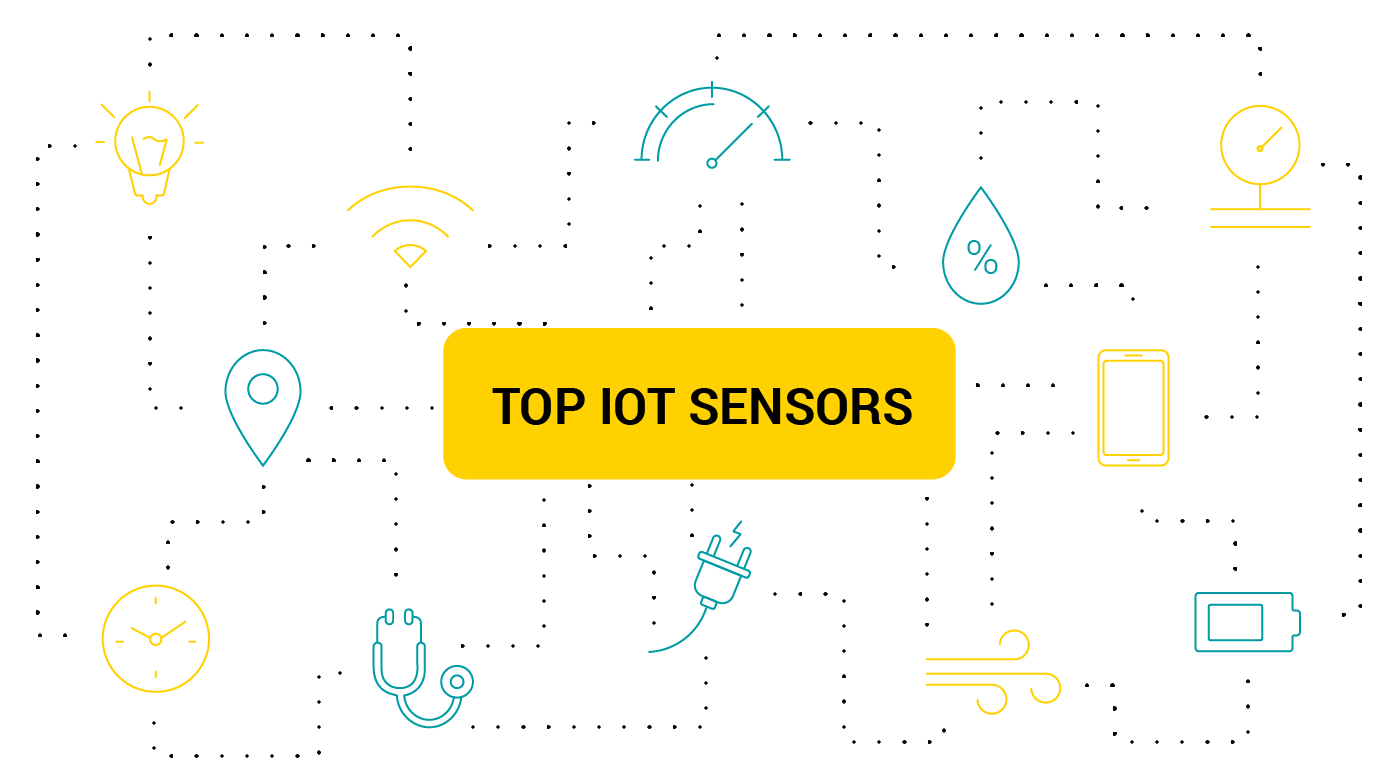 IoT, the hottest tech buzzword of the last years, is all about collecting, sharing and analysing data and creating value from it. But without accurate data, IoT would become a useless heap of technology. Hence, the importance of IoT device management and IoT sensors and actuators which enable it to sense the world and act upon it.

IoT is composed of several technology layers (Technology Behind Internet of Things) which enable ordinary things to share the data they collect over the Internet to ultimately deliver intelligence, autonomous actions and value which largely depend on the quality of the data itself. Therefore, sensors and actuators are an indispensable part of the IoT tech stack and a make-or-break factor in the development of every IoT system.

Obviously, sensors and actuators are important to IoT, but what are they after all? A sensor, also called a transducer, is a device whose task is to detect events or changes in its immediate environment and convert these physical phenomena (like temperature, light, air humidity, movement, presence of chemical substances and many others) into electrical impulses which then can be meaningfully interpreted. An actuator, on the other hand, can be seen as a tool which functions inversely to the sensor. By interpreting the electrical impulses sent from the control system and converting them into mechanical motion, it actually introduces changes to its physical surroundings by means of a variety of simple actions, including but not limited to opening and closing valves, changing other devices’ position or angle, activating them or emitting sounds or light. In simpler terms, the actuator is referred to as a ‘mover’.

While ordinary electrical sensors and actuators have been around for decades and are omnipresent in the modern industrial applications, the emergence of the Internet of Things has opened up completely new possibilities of IoT sensor and actuator application not only within the industrial sector, but also in the field of commercial and domestic use. As indispensable enablers of IoT, sensors and actuators help monitor, control, and streamline operations in almost every kind of sector, from smart vehicles to rainforest protection. Revolutionising the way they are applied and expanding the extent to which they are employed, the Internet of Things has put sensors to work for powerful, cloud-based analytical software to develop intelligent solutions for machines, people and environment alike.

Taking all the above into account, there can be no doubt that in order to maintain the fast-paced evolution it has been experiencing, the Internet of Things needs increasingly more efficient (and preferably low-cost) sensor solution. A reliable sensor and actuator system is the basis on which every successful smart deployment is built, therefore it is imperative to be aware of the kinds of IoT sensor solutions and options that are out there. Let’s explore the most common sensor types used in IoT.

Sensors can be either standalone devices or devices embedded in ordinary objects or machines to make them smart, and they can be divided into categories in terms of the physical phenomenon they are intended to measure. The following list is an overview of some of the sensor types most widely applied in IoT.

This most basic type of sensor finds its application in every kind of IoT use case where keeping track of thermal conditions of air, work environment, machines or other objects is vital. Temperature sensors are particularly useful in manufacturing plants, warehouses, weather reporting systems and agriculture, where soil temperature is monitored to provide balanced and maximised growth.

While their most obvious and widespread use is in meteorology stations to report and forecast weather, quite surprisingly, moisture and humidity sensors are also being extensively employed in agriculture, environment monitoring, food supply chain, HVAC and health monitoring.

Depending on ambient light intensity, smart TVs, mobile phones or computer screens are able to adjust their brightness thanks to light sensors, yet sensors for detecting ambient light are not only commonplace in consumer electronics, but also smart city applications. They are increasingly used for adapting street lights or urban lighting levels for increased economy.

Smart acoustic sensors enable us to monitor the level of noise in a given environment. Being able to measure and provide data to help noise pollution prevention, acoustic IoT sensor systems are gaining ground in smart city solutions.

To prevent natural disasters, data gathered by the water level monitoring sensors can be used in flood warning systems for analytics and prediction. Apart from environmental protection, this sensor finds its use in a variety of industrial applications to control and optimise manufacturing processes.

By emitting an electromagnetic radiation beam, this type of sensor is capable of sensing its target object presence and determining the distance that separates both. With their high reliability and long life, it is no wonder that they have quickly made it into so many IoT sectors, such as smart cars, robotics, manufacturing, machines, aviation, and even smart parking solutions.

A smart building system is probably the most banale IoT application for the motion sensor to imagine. While this obviousness holds largely true, apart from helping to monitor private or public spaces from intrusion and burglary, the use of motion sensors is extending to energy management solutions, smart cameras, automated devices and many others.

The task of this type of sensor is to detect rotation and measure angular velocity, which makes it perfect for navigation systems, robotics, consumer electronics and manufacturing processes involving rotation. For a more day-to-day IoT application, gyroscope sensors are increasingly installed in IoT devices used by athletes for accurate measurements of body movements to analyse and improve their sports performance.

Converting optical data to electrical impulses, an image sensor enables the connected object to view the environment around it and act upon it using the intelligence obtained from the analysis of data provided. Image sensors are used whenever there is a need for the smart device to ‘see’ its immediate surroundings, which includes smart vehicles, security systems, military equipment like radars and sonars, medical imaging devices and, of course, digital cameras.

Actuators, as the name itself suggests, can act on their immediate environment to enable correct operation of the machines or devices they are embedded into. Small as they are, they are rarely visible during operation, but the effects of their work can be felt in vehicles, industrial machines or any other electronic equipment involving automation technologies. They can be separated into four main categories based on their construction pattern and the role they play in a specific IoT environment:

IoT sensors are the small, seemingly insignificant gear that feeds data to IoT systems which is the real fabric on which machine intelligence is built. Actuators, on the other hand, represent the driving force (literally!) behind every smart enterprise. In both cases, the Internet of Things is not only interested in what they sense and how they operate, but also in the things that they enable us to do faster and better.